“Make HVAF one of your stops!” -JaMarlon to his fellow vets

Veteran receives a FREE car thanks to Indiana’s American Legion!

Being part of Team HVAF

The day after she officially became a Licensed Social Worker, Kascha received a job offer for HVAF. Six years later, she still loves being a part of Team HVAF!

Working for veterans means a lot to Kascha. All of the men in her family, including her husband, served in the military to some capacity. But one man that has made a lasting impact on her career choice is her grandfather.

After serving in the Korean War, Kascha’s grandfather ended up homeless for a few years. When he told her about his experience, she noticed how much he talked about the kindness of those who helped him.

“The people that I work with, I look at them not only as just someone I’m working with but also this is someone’s family member,” Kascha said. “And my outlook is these people were kind to my grandfather and helped him get his life together, I would hope that I can be one of those people that helps somebody else’s family member get their life back together again.”

Kascha serves HVAF as the Clinical Team Coordinator. In addition to having her own caseload of veterans to serve, Kascha also oversees the team’s billing, monitors outcomes, conducts team meetings, and makes time to support her team members.

“That is what we all work towards,” Kascha said. “It opens up the doors to anything you would want to do in our field.”

In the social work world, there are multiple levels to get to the highly respected LCSW level. Did you know after graduating with an undergraduate degree in social work, you cannot legally call yourself a social worker? It’s true – you must go back to school to become a Licensed Social Worker (LSW). After receiving the LSW title, some will go on to receive the LCSW title – which requires going through two years of supervision under someone with their LCSW, as well as passing a difficult exam.

“To a social worker, getting the LCSW is pretty much one of the biggest accomplishments they can obtain in their career,” Brian A., a former HVAF LCSW, said. “It takes years of study, testing and supervision to achieve licensure.”

Kascha said she does not like to take full credit for receiving her license, as she appreciates all of the support she received from her family, friends, and co-workers. She said her mom would watch her kids for the entire weekend many times leading up to the exam, her husband would take the kids downstairs so she could study with zero interruptions, and her co-worker, Doneeka, encouraged her to take some time off to study.

One month after passing the exam, Kascha said she still cannot believe it.

“It hasn’t full registered,” Kascha said. “That whole first week after I passed it, I kept looking at the paper. I would think, ‘it says pass, right??’”

And who was the first person Kascha called after she received the good news?? Her father.

Sadly, her father diagnosed has multiple myeloma – a cancer with no cure. She says she is a total “daddy’s girl” so the diagnosis has been very difficult for her.

He has served as a key motivation for her passing her exam.

“Always in the back of my mind I told myself, ‘I need to pass this while he’s still around for me to tell him,’” Kascha said, tearfully. “I wanted to actually be able to say the words physically to him that I’ve done this.”

And thankfully, through lots of tears, she had the opportunity to call him first and let him know. Because of the stress and emotional toll studying took on her, she said she found herself crying happy tears many times after passing the exam. 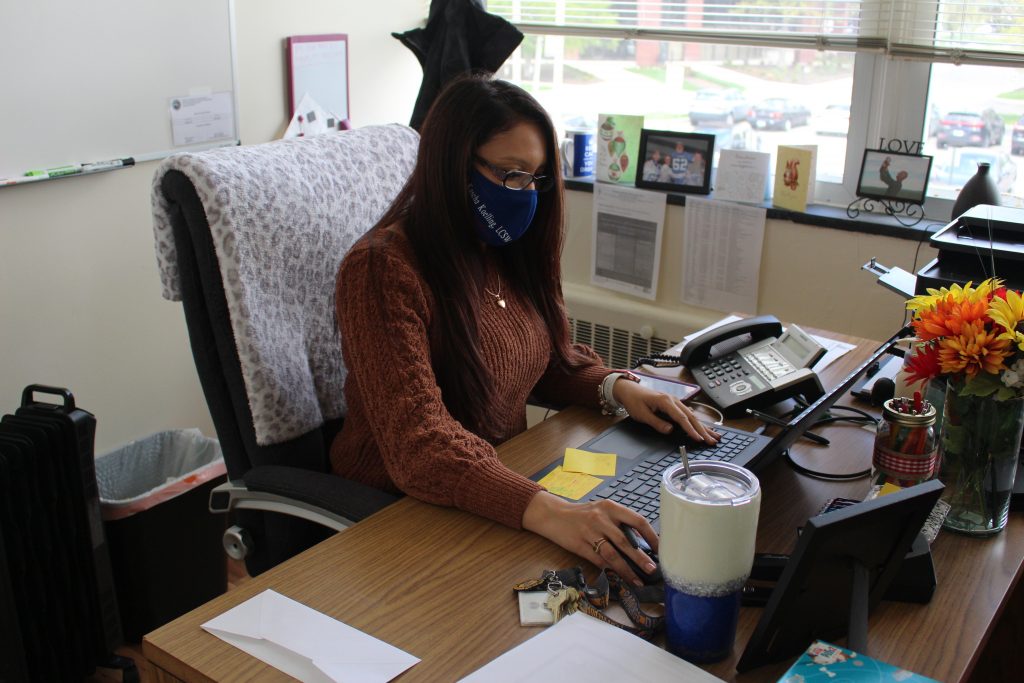 “You get this sense of completion,” Kascha said. “I finally finished what I wanted to achieve.”

Now, Kascha plans to use her new license to become a Certified Mental Health Integrative Medicine Provider. She had to have her LCSW before receiving this certification, so she is ready to get started.

With this certification, she will be better educated on looking at mental health with a more holistic approach. She will look at the veterans’ diet and nutrition and see how the different types of food they eat affect their mental health. She likes this approach as opposed to only prescribing medication to them.

“I will look at it as you are treating the entire person as opposed to just the individual problem,” Kascha said. “It will balance both medicine and nutrition, and I like that.”

Bryan Dysert, HVAF’s VP for Operations, has his LCSW and oversees all of HVAF’s case managers and social workers. He said when he felt so genuinely happy for her when he received the good news that she passed her LCSW exam.

“She worked hard and put in a ton of effort over the years to not only pass the exam but equip herself with the experience, knowledge, and intuition one needs to be an effective Licensed Clinical Social Worker,” Bryan said. “This is a big deal for Kascha and I couldn’t be more proud of her accomplishments!  I am honored to be her colleague and am thrilled to have her represent what makes a solid LCSW!”