When Melissa Weathers woke up, it was cold and rainy. Not a good start to the day, she thought. Then her thoughts turned to the homeless veterans who are often faced with great challenges like finding food or a bed to sleep in.

Melissa became aware of the homeless veterans issue after she supported HVAF food and clothing drives as a member of the Franklin American Legion Post #205.

On this cold and rainy day, she decided it was time to volunteer on behalf of HVAF again, and she knew just the way to extend a helping hand – the coupon collection program sponsored by her American Legion Post’s Junior Auxiliary, a group of children ages three to 17 who have veterans in their families and to gather to learn about patriotism and serve their local veterans community. 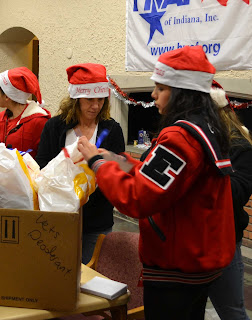 Volunteer Cheyenne Warnack delivers gifts to HVAF veterans “What better way to give back than to have our youngest members who each have a veteran in their family take over the coupon program and collect essential hygiene items for HVAF,” says Melissa, who is the Chairwoman of the Junior Auxiliary at Post #205.

Beginning in September, members began collecting coupons from the Sunday newspapers. The coupons were separated by categories, such as frozen, cold and canned foods.

As the holidays approached, the program used its coupons to purchase gift bags of essential hygiene items for each veteran in HVAF’s housing program, 200 men and women.

“It was a wonderful experience giving back to our veterans, as they have selfishly helped provide our everyday freedoms. Putting a smile on their faces and the feeling of gratefulness was the greatest feeling,” says Melissa’s daughter, Cheyenne Warnack, a 17-year-old Junior Auxiliary member.

In total, Cheyenne’s group purchased dozens of soap bars, shaving cream containers, and shaving kits that the veterans could use day-to-day.

On December 20, Melissa led her daughter and the other Auxiliary members to stops at each of HVAF’s 13 housing properties to deliver donated items to the veterans in person.

The day was cold and rainy, but it was a good start to the day Melissa told an HVAF staff member.