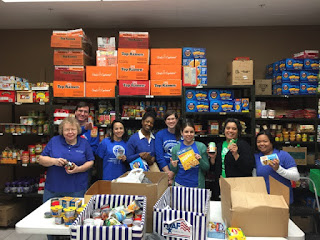 Eight volunteers spent the afternoon of January 27 in the food pantry at HVAF. When the American Legion Auxiliary National Headquarters Accounting Team arrived, there were bags and boxes of new food and hygiene donations lining the hallway, with more in the pantry. The donations needed to be sorted, checked for expiration dates, labeled, and organized on the shelves.

“Our Compliance Accountant was particularly enthusiastic about organizing the donations which were already on the shelves to better utilize the limited spacing,” says Carmela Garcia Accounting Grants Coordinator, American Legion Auxiliary National Headquarters. “Meanwhile, half of us were in charge of sorting and labeling new donations, while the other half were putting these away neatly on the shelves. All new donations were labeled and organized on the food pantry shelves within a couple hours.”
Several members of the Accounting team have family members who served in the Army, Air Force, and Navy during the Korean and Vietnam wars and more. One of the team members’ father was a 20-year veteran for the Colombian Army as well.
“For years, the national headquarters staff of the American Legion Auxiliary has been aware that HVAF meets a huge need for our Indiana veterans,” adds Carmela. “As a veteran-focused non-profit ourselves, we share a common mission of serving our veterans.”
The group collects donations in the office year-round and make trips downtown to drop them off. They stay up-to-date with HVAF news and needs through the HVAF newsletter.
“Occasionally, it’s nice to get out of the office for a few hours and do something mission-focused,” says Carmela. “Staff members of the American Legion Auxiliary have visited HVAF a few times before to tour and/or volunteer during lunchtime and each time is rewarding.”
Carmela adds that serving HVAF’s veterans has boosted their team’s comradery and sense of mission.
“It can be easy to get tunnel-focused on the minutia of daily duties—to live in a vortex of spreadsheets, financial reports, this data and that data. I mean, we love that stuff! But it’s really a wonderful experience to break away every now and then and re-center ourselves in the greater mission of what we’re doing. Through giving back, we are reminded that all of those little details that fill each work day are for the benefit of our veterans and their families, in the spirit of service, not self,” Carmela Garcia, Grants Coordinator.
Share