A veteran at HVAF gets a wake up call 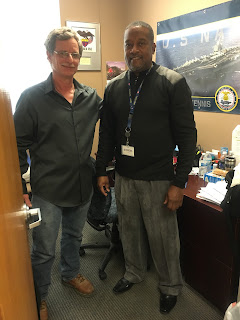 February 18 at 7:30am was a noteworthy date for Mark B., 51, a native of Houston, Texas. He returned back to work after 10 years of intermittent homelessness, job loss and countless setbacks. Mark currently calls Wheeler Mission home and is an electrician by trade.

A veteran of the Navy, he joined served in 1983 and was stationed in Houston, Texas. After he fulfilled his duty, Mark was lured to Colorado for its varied natural landscapes.
But, after several years of working odd jobs, Mark packed his bags. He had set his sights on Indianapolis to live with his sister. In Indianapolis, his living situation crumbled and Mark says he was left to live on the streets. He called HVAF for help with employment services in December 2015.

Employment specialists at HVAF helped Mark create a resume as well as provided him with the tools needed to apply for jobs he was not only interested in but qualified for.

Employment specialists work daily on meeting the needs of Hoosier veterans. Last year, we served a total of 325 clients of which 225 clients secured gainful employment.
Whether it’s building resumes, serving as a resource for job leads, or transporting veterans to and from job fairs, it’s a resource that is life-changing.
At HVAF, Mark met Employment Specialist and Navy veteran Rodney Jackson. There is a shared brotherhood between the two men and Rodney does not take his role at HVAF lightly and feels he is making a difference in the lives of the veterans he helps each day.
“Mark is not a quitter, that’s for sure,” adds Rodney. “It’s been amazing to watch his self-esteem soar through the process.”
Mark is indeed a fighter. He does not give up.
On February 18 at 7:30am, he began working at LGC Associates at a concession in the Indiana Convention Center and is currently looking for permanent housing.
Share