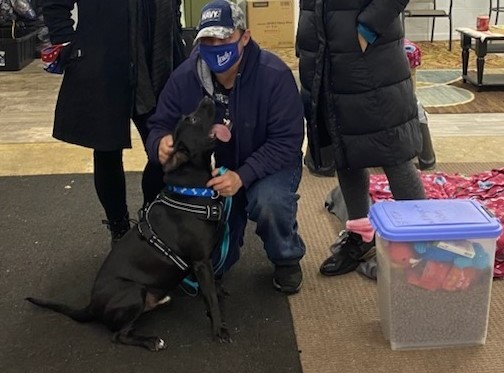 SOAR Initiative has served Indianapolis’ homeless and their animals since 2014.

Angela Hopson began working as a Street Outreach Professional for Horizon House six years ago. As she visited, she saw there was a need not just for the homeless – but for their pets. She said it started out as simple as taking dog food baggies and flea medicine out to the camps. It evolved from there, as they created the Crisis Response Foster Program.

“We had an individual who was homeless who had cancer and needed in-patient care and surgery. They weren’t going in because they were scared to lose their dog,” Angela said. “That was our first medical foster.”

Since then, Angela founded the SOAR (Street Outreach Animal Response) Initiative and has her own building in Indianapolis for the animals to stay at while their owners receive the help they need. SOAR Initiative has worked with HVAF’s veterans’ pets for several years.

“Most of our referrals this years during COVID have come from HVAF,” Angela said. “We love working with the case workers and the clients.”

And Stitch is one of SOAR Initiative’s most recent residents.

Stitch’s owner is Navy veteran DJ – who currently resides in one of HVAF’s properties, Veterans Villa. While DJ could receive inpatient treatment for PTSD, Stitch stayed at SOAR Initiative and received training.

“Stitch came in unsure about anyone else but DJ, which we find very common – especially with veterans because they may have been socially isolated,” Angela said. “We played, we did training, and we had a strict and structured routine so he knows what to expect and feels confident about his day.”

And after 45+ days apart, DJ and Stitch were finally reunited and live together at Vet Villa. You can watch the sweet reunion below:

Angela said she had tears when she saw DJ and Stitch reunite. She added that it is so clear how they are completely bonded.

“It’s emotional,” Angela added tearfully. “This is a human and a dog that belong together.”

If you would like to help us continue to serve Indy’s veterans – and even their pets – you can make your year-end, charitable donation today!