It was through a simple Google search that Triton Central Middle School language arts teacher Tiffany Almond discovered HVAF. Her motivation for consulting the search engine was a discussion with her seventh grade students that came up regarding the homeless veteran crisis. After talking about the problem of homelessness among our nation’s heroes, Almond’s students insisted on learning more about the issue and what they could do to help.

After finding HVAF online, Almond connected with Volunteer Coordinator Robin Close and scheduled a visit on April 7 for her seventh grade students to come to HVAF.

During the visit, the students observed what goes on during any given day within an HVAF facility. The students saw the food pantry and the clothing pantry on their tour, and they recognized that HVAF was low on many supplies. The students also had the opportunity to eat lunch with several HVAF clients in the Residential, Employment, Substance Abuse Treatment (REST) program and hear their stories about overcoming substance abuse and re-integrating into daily life after their service.

“One of the veterans told me that seeing us kids touring and wanting to help made his day. That made my heart smile,” said Triton Central student Bella.

On the bus ride back to school after their day at HVAF, the Triton Central Middle School students began formulating plans to serve HVAF in its mission of helping homeless veterans. Later that week, the students launched a canned food drive and a hygiene item drive at their school to collect items to replenish HVAF’s supplies.

On May 18, Almond’s class returned to HVAF, bringing the food and hygiene supplies that they had collected with them. After dropping off the supplies, the class caravanned over to the Warman property, where they planted the five flats of flowers that they had raised money to purchase for HVAF. In addition to planting the flowers, the students worked outside at the property for three hours pulling weeds and mulching.

Because of a single Google search, Almond’s students were connected with HVAF, where they saw a need among their heroes and decided to do what they could to meet it. Because of their willingness to help, they made a lasting impact on the lives of the veterans that HVAF serves. 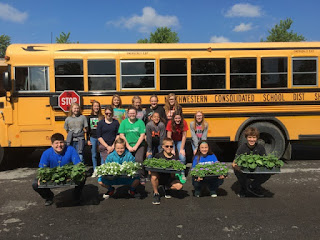