Last February, Supportive Services for Veteran Families (SSVF) case worker Mark Lykins saw a need among his clients. After observing veterans in different HVAF programs for several months, he realized how transportation was a limiting factor for many veterans trying to get back on their feet. As Lykins was trying to think of ways to help, he had an idea. He called together a committee to organize a way for people to donate bikes that they were not using so that veterans could use them for transportation. 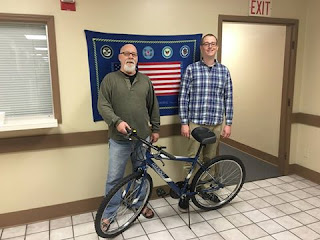 “Busses don’t get everywhere, and many veterans work where bus routes do not reach. I know some who have to walk as far as two miles to work because the busses stop short of where they need to go,” Lykins said.

By donating a bike to HVAF, someone can equip a veteran to do everyday things such as get to work, transport groceries home from the grocery store and see their family. Bikes also encourage veterans to go outside and exercise, helping them get out of their houses and gravitate away from an isolated lifestyle.

“We have already had three bikes donated, and they have made a difference in the lives of veterans who have received them,” Volunteer Coordinator Robin Close said.

One former HVAF client, Mike, received a bike at the beginning of May. He claimed that the bike had a major impact on his life. Before receiving the bike, Mike had to walk everywhere. This presented problems because of his medical issues, which caused him to have difficulty breathing and swollen feet. After receiving his bike, Mike is now able to be more mobile.

“Since receiving my bike from HVAF, I now have the ability to go outside of my neighborhood.  I am so grateful for whoever donated my bike; it was such an act of kindness,” Mike said.

Mike now volunteers his time with HVAF after benefitting from the program himself. He encourages anybody who has a bike that is not in use to donate it so that more veterans can benefit from the gift of transportation like he did.

“A gift as simple as a bike can be a real life-changer,” he said.

There is currently a waiting list with the names of veterans who are in need of a bike, and we are asking donors to please consider donating bikes that are no longer being used. Those interested in donating a bike should contact Mark at mlykins@hvaf.org.