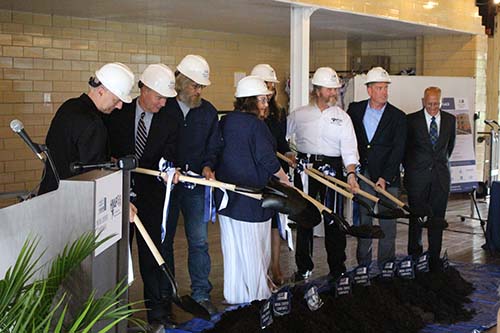 “HVAF is proud and privileged to partner with Woda Cooper Companies in expanding veteran-friendly affordable and supportive housing options in Indianapolis,” said HVAF President & CEO Brian Copes. “As an agency dedicated to serving veterans, we are grateful for the opportunity to provide safe housing to those who need it most.”

In addition to providing high-quality affordable apartment homes and a wide array of amenities, residents will have access to onsite case management, supportive services, and transportation assistance.  An earlier five-bed transitional housing facility is being redeveloped as part of the new community.

Proctor Place is named in honor of Sergeant Joseph Eugene (Joey) Proctor, a member of the Indiana Army National Guard, who was killed in action during combat operations in Iraq in 2006 and awarded the Silver Star for heroism and conspicuous gallantry.

“We are proud to associate this effort with such a distinguished Hoosier veteran and we are grateful for Joey’s service and sacrifice,” Brian said.

Supporting veterans was a goal for this development from its inception, said Nick Surak, Senior Vice President with Woda Cooper Companies, Inc. “Our partnership with HVAF of Indiana is critical — Proctor Place will expand on their proven expertise in providing housing and other services for the state’s veterans.”

In total, the three-story Proctor Place will offer 61 units: 15 one-bedroom, 31 two-bedroom, and 15 three-bedroom general occupancy apartments available to residents who earn up to 30%, 50%, and 80% of area median income. Rents will range from $461 to $1035 depending on the size of unit and income restriction. The award of housing tax credits from IHCDA was essential in obtaining the equity financing needed to ensure affordability.

Watch the full ceremony below:

Proctor Place Groundbreaking in the media: