Message from the CEO: Women veterans are the fastest growing segment of the homeless population | HVAF

Message from the CEO: Women veterans are the fastest growing segment of the homeless population 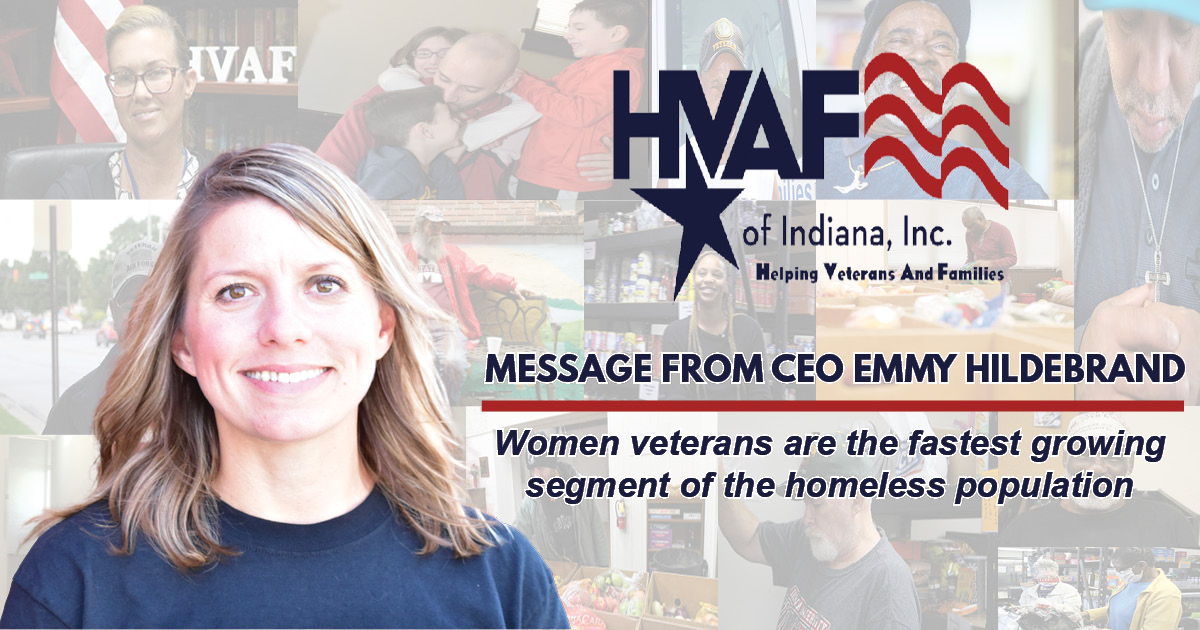 In 2009, then Secretary of the Department of Veterans Affairs, Eric Shinseki unveiled a five-year plan to end veteran homelessness. He said, “Those who have served this nation as veterans should never find themselves on the streets, living without care and without hope.” At HVAF, we couldn’t agree more.  The sad news is that while great progress has been made towards his goal, with a significant reduction in the rate of homelessness among veterans from 2009-2019, women veterans have seen a dramatic increase in homelessness. In fact, according to the Journal of Military, Veteran and Family Health, during that same period, rates of homelessness increased by 135% among women veterans.

From the Revolutionary War to today, women have been volunteering to serve our nation—even when they were not allowed to enlist in the military. It wasn’t until 1917, with the creation of the US Army Nurse Corps that women were officially recognized for their military service. Throughout the conflicts of the 20th and 21st centuries, women continued to answer the call of duty. In fact, women comprise over 12% of Operation Enduring Freedom/Iraqi Freedom veterans—the largest cohort of any era of service.  Today, approximately 15% of those serving in our Armed Forces are women. As we celebrate Women’s History Month, we remain grateful for those who selflessly serve our country and protect our freedom.

At HVAF, we have seen firsthand the increase in women veterans and their families facing homelessness.  From 2016-2021, the number of women enrolled in HVAF programs increased by 33%. We have seen that women veterans experience homelessness for a variety of reasons, including unemployment, mental and physical health conditions, domestic violence, substance use and lack of affordable housing. However, many women veterans facing homelessness have also been victims of military sexual trauma. According to the Journal of General Internal Medicine, nearly 40% of homeless female veterans enrolled in VA healthcare experienced military sexual trauma. And, they have a “significantly higher likelihood of almost all mental health conditions examined as compared to other homeless women and men, including depression, posttraumatic stress disorder, other anxiety disorders, substance use disorders, bipolar disorders, (and) suicide.”

I am grateful for the team of dedicated mental health professionals serving at HVAF to ensure that women veterans are provided with the care and support they need when facing homelessness. With a focus on trauma informed care and individualized services and supports, we are working to offer housing, hope and self-sufficiency to every woman veteran who comes through our door. As we celebrate Women’s History Month, it’s the least we can do.