Message from the CEO: Women veterans are the fastest growing segment of the homeless population 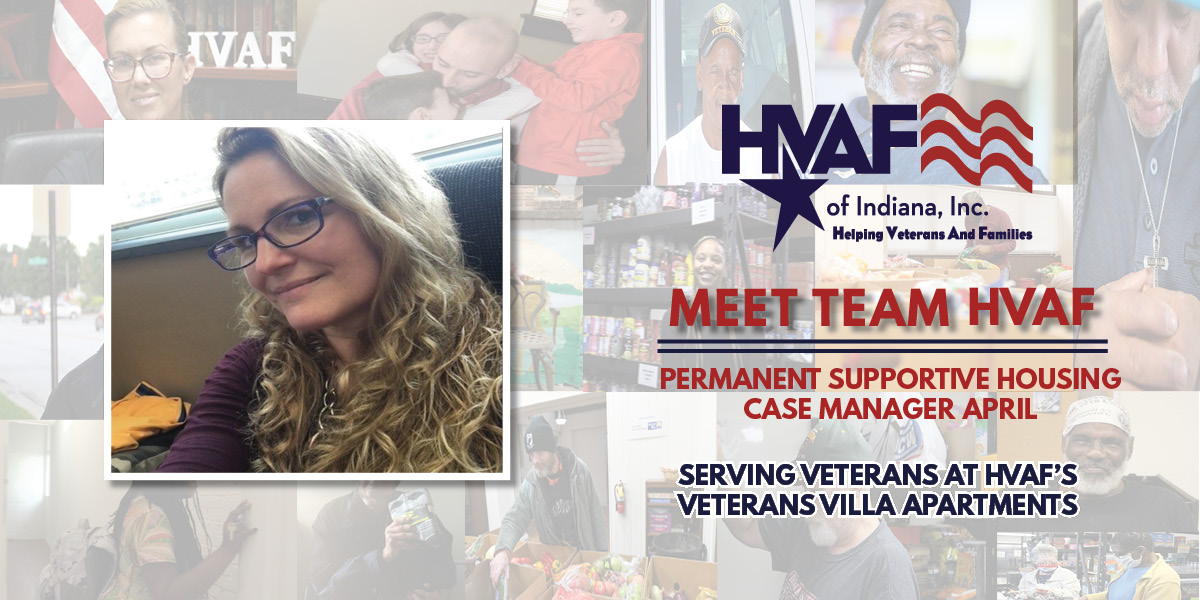 April has served Indy’s homeless and at-risk veterans as a case manager at HVAF for 3+ years. For the last 2 years, she works on site at HVAF’s Permanent Supportive Housing apartments Veterans Villa. Although it can be tough, she loves to serve Hoosier Heroes. And they love her! Hear what some of the veterans she serves have to say:

A: My chief role is supporting formerly homeless veterans in Permanent Supportive Housing (PSH) in order to prevent another episode of homelessness and help them achieve housing stability.

A: HVAF is a unique organization that empowers staff to utilize strengths and expand skill sets. HVAF strives for excellence, equality and diversity, and is an agency with true heart. It is also always in a stage of growth, practices being a good community partner, and does not settle for status quo. We endeavor to offer valuable services to our veterans that can change, and even save, their lives. HVAF is a respected and trusted agency that is, I believe, “in it” for the right reasons.

Q: Why do you want to serve veterans?

A: Because they served us first. Military service often means an individual has layers of trauma not experienced by the general population. Serving them necessitates an extra layer of understanding and trauma informed care that I am honored to aspire to give.

Q: What is it like working at (HVAF’s Permanent Supportive Housing apartments) Veterans Villa?

A: Serving veterans on a daily basis is a privilege. Frequent, daily contact with veterans who live on-property is not only rewarding for me, but it also fosters a flow of communication that results in better outcomes for the residents. But I do miss being at the main building and the camaraderie with my other teammates.

Q: Describe one of your favorite “success stories” at Vets Villa?

A: Naming a favorite success story is hard. So I’ll go with the latest one. I’ll call him “Sid”. Sid was chronically homeless, elderly, and physically ill. He’d had some serious legal and behavioral health problems (including evictions) that prevented him from maintaining housing. He has family but, due to similar issues, he was also unable to stay with them. Being on the street was treacherous for him. He even had his hair set on fire by bullies while he was homeless. Sid also has an Serious Mental Illness (SMI) and is court-ordered to receive a monthly injection.

Since moving into Veterans Villa, Sid’s life has gotten much easier, and even happier. He was also approved for a HUD-VASH (Department of Housing and Urban Development-Veterans Affairs Supportive Housing) voucher so he is now entitled to a rent subsidy.

Sid comes to the office throughout the week just to check in and have a cup of coffee. He greatly benefits from the food pantry at Veterans Villa as well and has become friends with a couple of other veterans here (though he mostly stays to himself). He even leaves me messages on weekends just to let me know he is “doing alright.” William, Vets Villa’s Property Manager, took care of a vital need for him one day, when SID was unable to get into the VA on his own. I won’t go into the details, but William worked some magic that made a HUGE difference in this veteran’s quality of life. “Sid” knows we care about him, and that has made all the difference. That is what PSH is all about.

A: I’ve learned some things the sad way. One of which is how to spot when someone may be going into life-threatening Alcohol Withdrawal Syndrome (AWS). One of our Vietnam veterans, who was also an alcoholic, did not get out of bed for a few days. Since we perform wellness checks, I was keeping an eye on him daily, taking him food and fluids, but did not realize how dire his health crisis was.

He’d placed a 5-gallon pail beside his bed because he didn’t have the strength to get up and go to the restroom. What I didn’t realize is that he was losing all his fluids. On his last day in our building, he suddenly could not hear me when I spoke. He just looked at me and held his ear as if to say, “come again?” We called 911 but, sadly, this veteran had become so dehydrated, his brain was badly damaged. His organs were beginning to shut down. He spent a week or so in the hospital but was unable to recover. Our veteran died. I am now more aware of the signs of severe withdrawal, and how both extreme alcohol intoxication and withdrawal can precipitate death.

Q: When you are not working, where can we find you?

A: When am I not working? Ha! I’ll usually be at home with my dogs or in Bloomington with my grandma. And I just started going to church on Sundays again.

Q: Anything else you would like to share?
A: Special shout outs to the people and agencies who have helped nearly eliminate food insecurity at Veterans Villa:

Jose’ Flores (VA Peer Mentor) and Don Hawkins (owner of HHOOT). Jose’ delivers the food each week that is donated by Don Hawkins’ warehouse. This is why we are able to operate a food pantry at Veterans Villa.

Second Helpings, who delivers sandwiches and single meals on Wednesdays and lets us pick up more sandwiches on Fridays.

Vincent de Paul, who delivers bags of groceries on Wednesdays (and more leftovers on Thursdays) to specific veterans who are disabled, on fixed incomes and physically or mentally unable to go out and shop for themselves.