HVAF of Indiana, Inc. Runner of the Month

HVAF of Indiana, Inc. client William W. on his new path for the New Year

IUPUI students give back to HVAF of Indiana, Inc. 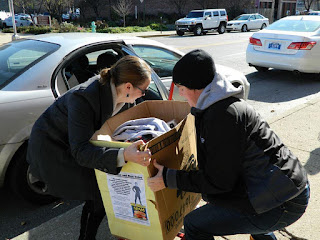 IUPUI students with the School of Public & Environmental Affairs dropped off more than 60 boxes of warm clothes & canned meat collected by the Public Affairs Student Association (PASA) at IUPUI.

“The men and women who entered our military were willing to give their lives in service to this country,” says Erin Braun, IUPUI student and former Marine. “We owe them better, and I’m honored and relieved to have HVAF here to help.”

Erin Braun first got involved with HVAF in early 2010, after reading an inspiring article about Back on My Feet, a national organization helping the homeless population by promoting running. She volunteered with BOMF as an HVAF runner, as well as volunteered on HVAF’s Freedom Ride and Summer Festival committee in 2011. She wanted to do more for HVAF and met with her colleague Adriene Tynes and group at Public Affairs Student Association (PASA) at IUPUI.

“We set up a meeting with HVAF staff to discuss ways we might help, and then presented those ideas to our members,” says Adriene Tynes, IUPUI student. “We decided to focus on an immediate need, with more strategic planning for diverse volunteer opportunities at a later date.”

After touring HVAF’s warehouse to see what was most needed, they decided to launch a “Meat and Heat Drive”.

Almost 400 items were donated to HVAF, including over $600 of warm clothing.