IUPUI students give back to HVAF of Indiana, Inc.

HVAF of Indiana, Inc. client William W. on his new path for the New Year 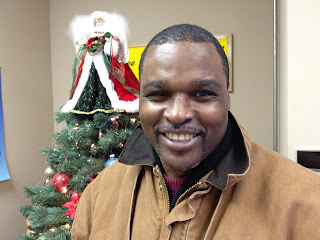 As a boy William W. lost his mother.

“My childhood wasn’t easy. I felt like my world ended when my mother passed away,” William says. “I went to live with my extended family but felt like I never fit in, because I thought that my family never loved me the way my mother loved me.”

After high school, William joined the Marines, serving in Japan, the Philippines and Korea from 1983-87. But upon his return to civilian life, he was still consumed by the pain of his childhood. He became addicted to alcohol and was homeless.
“I tried to fit in everywhere,” says William. “But my addiction to alcohol prevented me from making any deep connections with people for 30 years.”

After decades of running from his troubles, William is now running towards a brighter future with help from HVAF of Indiana, Inc. and its partner organization, Back on My Feet.

“I had not run since I left the service and frankly I was out of shape,” William says.

With Back on My Feet, which announced its collaboration with HVAF in March of 2011, William and other Central Indiana veterans who have experienced homelessness are learning self-sufficiency and building confidence through long-distance group running.

“I am bettering myself by training with the guys every Monday, Wednesday and Friday at 5:30 a.m.,” William says. “It’s an early start, but I feel motivated and productive the rest of the day.”

“William has come a long way in learning to believe in himself,” says Brian Meyer, Back on My Feet program director. “He will be successful at anything he chooses because he’s motivated.”

William joined HVAF in June 2011 and works with a case manager and a peer mentor, Fred Young, to build a better future. Shortly after coming to HVAF, William began his regular running schedule with Back on My Feet. Already, he is serving as the team captain of his running group, which gives him additional responsibilities like motivating other runners towards success.

“I’m charting a new path in the New Year, and it includes sobriety and plenty of exercise,” Williams says.

William plans to compete in the Carmel Marathon on April 21, 2012. It will be his first marathon.