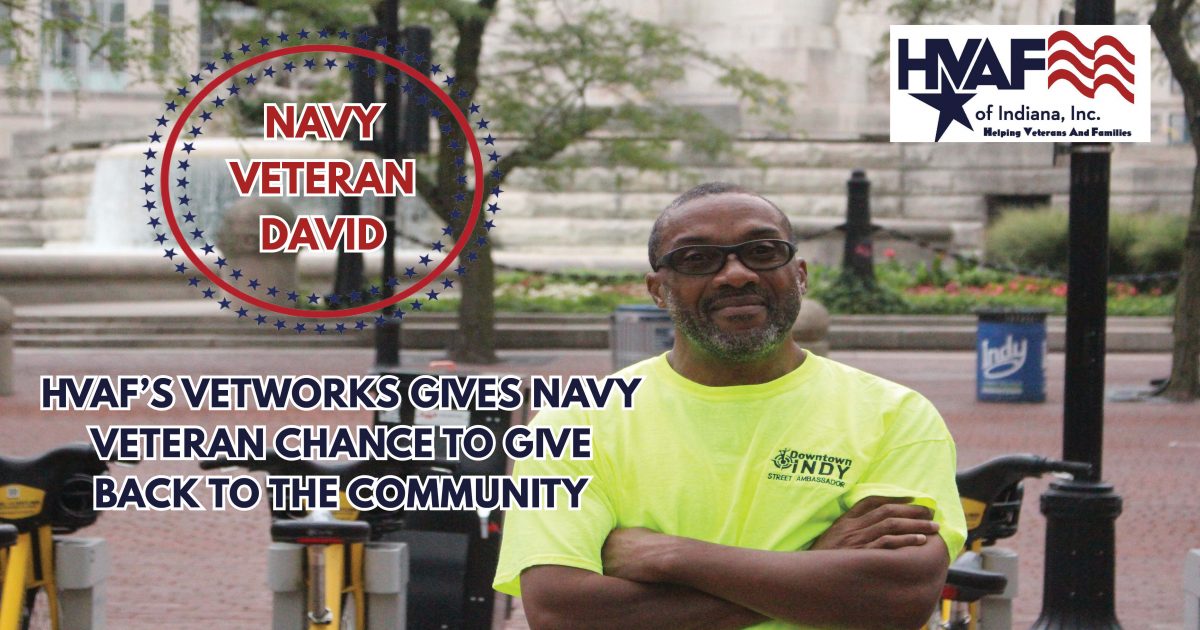 At the beginning of this year, Navy veteran David got out of rehab and came to HVAF. He had used HVAF’s services before, so he knew he could count on us for help once again.

While he initially just wanted help with housing, someone told him about VetWorks while waiting in the lobby.

VetWorks – Veterans Workforce Renewing Knowledge and Skills – is an intensive 3 phase work, learn and earn program designed to skill up our veterans to achieve their earning potential. Veterans will complete on-the-job training, have access to education/certifications and receive assistance with obtaining a good and promising job.

After being accepted into the program, David began Phase I as a street ambassador at Downtown Indy in April.

“It was an adjustment. I wasn’t used to working – I had been out of work and homeless for about a year,” David said. “I liked the one-on-one time, and the training to improve on my interview and communication skills.”

Eventually, he became a power washer and received a promotion as he trained others on power washing as well. He enjoyed meeting new people each day out on the streets of downtown – as well as networking with Downtown Indy employees.

“He came to Downtown Indy as a very reserved person. It takes him a while to open up,” David’s Employment Specialist during Phase One, Cole, said. “But he has really grown as a leader. It’s been really wonderful to see him take on new responsibilities.”

During Phase II, David completed all of the training to earn his Peer Recovery Coach certification.

Now, David is in Phase III, working as a Peer Recovery Coach at Community Hospital East. When people struggling with addictions come through the emergency room, David talks with them about resources in the community to help them with what they are going through.

Alberta is now David’s employment specialist in Phase III, as she helped him with creating his resume, going through the onboarding process in his new job, and providing work clothes. She checks in on him periodically as she continues to support him through the first year of this job.

As a recovering addict himself, David is happy to give back to the community in his new career.

“It means all I went through wasn’t for nothing,” David said. “When I was in my addiction, I took a lot from the community. And I feel like I can give something back now.”

You can ensure Indy’s veterans receive amazing career opportunities – like David was able to. Please consider making a tax-deductible donation to HVAF today: