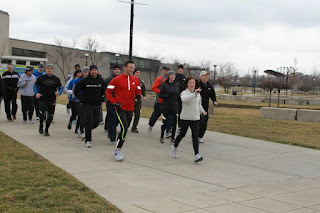 HVAF veterans ran alongside 28-year-old Cpl. Cory Smith, who had just finished a 565-mile bike and run trek in 28 days from Columbus, Ga. to Indianapolis, Ind., in an effort to raise awareness of veteran issues, such as homelessness.

Cpl. Smith, who faced his own marital difficulties after two deployments to Afghanistan, said combat veterans in particular can face divorce, homelessness, unemployment and suicide upon returning home. Smith just completed four years of military service and is returning to civilian life. 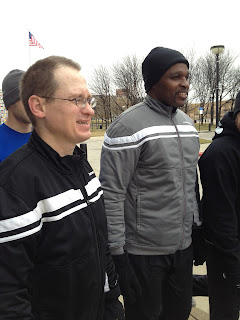 “It means a lot to be here today,” says Lee W., a navy veteran and HVAF client who is photographed left. Lee came to HVAF in 2009 in need of housing, and had a strong desire to change his life around.

“I know what it’s like to struggle with the transition from military life to civilian life,” says Lee. “I appreciate what Cory is doing in showing the hardships us veterans face. We should support each other.”

Lee, who served in the Navy from 1982-1990, returned to Indianapolis, Ind. and struggled to find a job. “I stayed with friends until I learned about HVAF. I am fortunate to have received transitional housing at HVAF’s Warman Apartments.”

An HVAF case manager is helping Lee with goal-setting as he works to become self-sufficient. 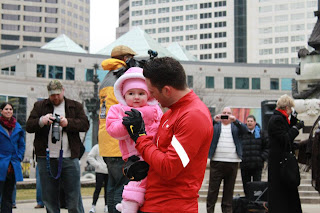 The corporal was not only surrounded by HVAF veterans and Back on My Feet runners, but also family members and city officials who applauded his efforts in running the 565 mile trek. Smith was re-united with 20-month-old daughter, Elleigh, whom he held in his arms throughout much of the ceremony on Monument Circle.

Read more about the event in the February 9, 2012, feature story in the Indianapolis Star.