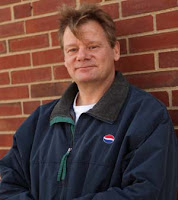 Mike S. was just 19-years-old when he vowed to defend the United States against all enemies, foreign and domestic, and joined the Marines. Thirty years later, at age 51, he was homeless and living under a bridge.

The brotherhood of the marines and love for country and adventure is what led Mike to join the Marines in June of 1978. He was making steady pay at the standard armed forces rate. “I loved it,” Mike said of his time in the Marines. “I wanted to do something to make a difference and make my family proud.”

After serving with the Marines, Mike went back to civilian life and obtained a Bachelor of Science in Chemistry, becoming a metallurgist by trade. But a number of stresses soon led to drug and alcohol addiction that he’d battle for years. On May 4, 2010, the Nashville floods caused the factory he worked for to shut down. Like thousands of Tennesseans, Mike became displaced so he traveled to Indianapolis in hopes of finding work at one of the city’s many foundries. Work didn’t come easy, and he lived under a bridge near the White River for thirty days.

“It was hard to stay safe and clean but I wanted to make something of myself and didn’t want to continue going down a wrong path. I wanted a safe place to live and steady job,” says Mike.

In October 2010, after spending a few days at a downtown shelter, he contacted HVAF for help. “Kalisha Hayes, a case manager at HVAF, has helped me a lot. She’s a good person and is always willing to help me with anything. She encourages me to keep doing what I’m doing. I’m taking baby steps,” says Mike.

Mike moved into HVAF’s Warman Apartments in December and was offered a job through a temporary service. With no transportation he walked eight miles to-and-from work before purchasing a bike.

“Mike has a positive attitude and wants to keep moving forward,” says Mike’s case manager. Next month Mike moves into his own apartment and his ultimate goal is home ownership. He has been sober for more than six months. He says the key to change is taking “baby steps.”