Tim, 57, joined the Army in 1978 because he wanted to try something new. He had previously been working at the YMCA in Peru, Indiana, and he hoped to find some adventure and value in serving his country. His father and his two stepfathers had both served in the Army, but Tim’s experience during his service proved to be quite different. Soon after being stationed at Fort McCLellan in Alabama, Tim was diagnosed with scoliosis and sent home. Because he had only been able to serve for a couple of months before his diagnosis, Tim regarded himself as a failure. 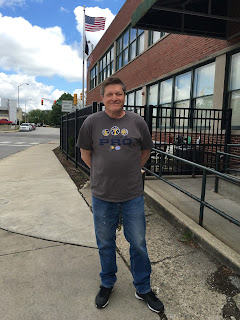 “My diagnosis played a negative role in my life and it had a domino effect as my life soon began to spiral out of control,” Tim said. “I turned to drugs and alcohol, and I kept everything bottled up.”

After leaving the Army, Tim jumped from state to state and lived as a gypsy for over twenty years. During this time, Tim tried three different rehab programs but none proved to be effective. Tim wanted to find a job in medical billing, but he was forced to work odd jobs to make ends meet because he lacked a stable living situation and struggled with addiction.

“After I came back, I found it difficult to get adjusted. I struggled with depression, and I was even suicidal. I would ask myself, ‘What’s the point of living if I’m going to live like this?” Tim said.

Last August, Tim decided to return to Indiana, where he went through an inpatient rehab program at Sidney and Lois Eskenazi Hospital. After he completed the program, Tim spent two months in a Horizon House transitional shelter, where he obtained help with his DD214 form, and then he came to HVAF in October for help in finding a job and permanent housing.

“When I arrived at HVAF, I was nervous and wasn’t sure what to expect, but my time at HVAF has been nothing but a positive experience,” Tim said. “HVAF has given me a new outlook on my past and a jump start towards my future.”

Once at HVAF, Tim worked with Sarah Reed, his case manager, to obtain temporary housing at the Keltner House, one of HVAF’s residential properties. He also worked with Employment Specialists who helped him create a resume and apply for jobs. Tim was offered a job working at the Indianapolis International Airport soon after his arrival, but he still hoped to find a job in medical billing.

Even after Tim had been hired at the airport, employment specialists continued the job search with him in hopes of finding him the job he had always wanted. As a result of hard work and persistence, Tim was offered a job as a customer service representative for Vespa Group in April. He was also able to find an apartment of his own through HVAF’s Supportive Services for Veteran Families (SSVF) program, which helped him pay his first deposit, rent and utility payments.

Tim will begin his new job in June by waking up at 6 a.m. and boarding the bus for an hour-and-thirty-minute commute. Once he arrives at work, Tim will be handling customer calls and explaining customers’ benefits within their medical insurance coverage.

Tim has been sober for over a year now and has reconnected with some family. He expresses deep excitement and gratitude for this employment opportunity and is enthusiastic about his future.

“When I came to HVAF, I had nothing other than the clothes on my back. Now, I have a savings account with more money than I have ever had before, an apartment of my own and my dream job,” Tim said.