HVAF of Indiana, Inc. veterans and others picture their perfect holiday gift

HVAF of Indiana, Inc. Runner of the Month 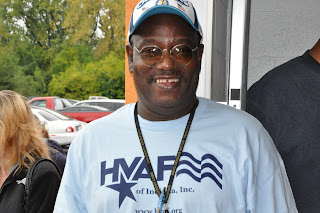 Fred Young’s father had served in WW2,and with eleven siblings, Fred says he didn’t want to be a burden on his parents. So, in 1975, after graduating high school, eighteen year old Fred Young, wide-eyed and full of hope, packed his bags and headed off to basic training at Fort Knox, Kentucky.

At Fort Knox, Fred found that his toughest opponent was not on the Army training field but inside a bottle.

“I was lonely and even though I was training alcohol was available. I hid the bottles of booze, says Fred. “I drank to escape, and if it altered the brain, I tried it,” says Fred, who began drinking at age thirteen.

After being stationed at Ft. Campbell, Kentucky,Fred says his drinking escalated. He left the military after three years of active duty and another three in the reserves.

Returning home can sometimes be the most challenging aspect of a soldier’s tour of duty, especially if he takes that journey alone.

Fred was back home in Indianapolis, Ind., and was living with his parents. With no job, steady income, or his own place to call home, Fred feared he would become a statistic. According to the U.S. Department of Veterans’ Affairs about 200,00 veterans experience homelessness every year.

Eventually, Fred landed a job at General Motors where he worked for fifteen years. Fred was making good money, but he was still battling his alcohol addiction and living day-to-day. In 1995, Fred left GM.

“I let my addictions get the best of me and ultimately could not hold down my job,” he says.

Soon, Fred was living in a cardboard box by the Indianapolis canal or was in and out of missions before winding up at a recovery-style church home. This is where Fred says he embraced his spirituality and finally opened up to a case manager about his addictions and entered a halfway house.

In 2005, while still living in the halfway house, Fred was hired at HVAF as a Peer Mentor, helping veterans find a way to make better choices.

“If you had told me I was going to do this as a teenager, I would have told you that you are crazy,” says Fred. “I believe spirituality got me through basic training and through life. And if it wasn’t for the military, I wouldn’t be where I am today. I gained discipline, structure, and a sense of independence.”

You can read more veteran success stories in the HVAF December newsletter at http://www.hvafofindiana.org/Newsletter_Sign_up.html.