Gift of hope: food for veterans during toughest times 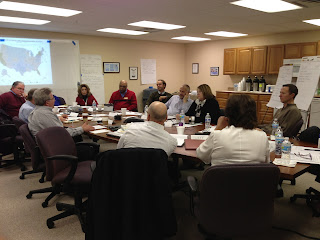 On Thursday, policy makers and advocates met at HVAF of Indiana, Inc. to discuss changes in homeless veterans programs and services.

More than a dozen people representing the U.S. Department of Veterans Affairs (VA) and Community Based Organizations (CBOs) from throughout the country attended the meeting. The topics they addressed included the Homeless Providers Grant and Per Diem (GPD) Program, which funds transitional (temporary) housing for homeless veterans.

Generally, the meeting group focused on bridging the gap between the VA and service providers. Participants also worked to identify a best model for permanent housing and ongoing case management for eligible homeless veterans.

Stephen Peck, President & CEO of U.S. Vets, a provider of transitional housing and the nation’s largest nonprofit provider of services to homeless and at-risk veterans, says the meeting was called after service providers expressed concerns of being left out of the VA’s decision-making process. Peck is also one of the founders of HVAF of Indiana, Inc.

Lisa Pape, LISW, National Director of Homeless Programs for the Veterans Health Administration (VHA) within the Department of Veterans Affairs (VA) expresses optimism about today’s meeting, saying the VA is on track to meet the White House goal of ending veteran homelessness by 2015.

“I have a sense of renewed energy today,” says Lisa. “We’re coming up with solutions to better serve our homeless veterans, and discussing necessary changes we’ll need to make to serve these veterans, specifically in the Grant and Per Diem Program.

“Simply providing shelter is a quick and easy solution, but one that doesn’t address the deeper causes of homelessness and therefore doesn’t solve the problem,” says HVAF President & CEO Charles Haenlein.

“Do we simply house homeless veterans, or do we rehabilitate them? We’re need to be on the rehabilitation side,” adds Stephen.

HVAF provides housing to more than 200 previously homeless veterans in a mix of properties and also provides services to an additional 200 homeless veterans each week through outreach. In addition to housing, HVAF provides case management services, food, clothing and veterans’ other basic needs for up t o two years while the veteran becomes self-sufficient.