One of the golden thirteen with ties to HVAF of Indiana, Inc. honored by park dedication | HVAF

One of the golden thirteen with ties to HVAF of Indiana, Inc. honored by park dedication 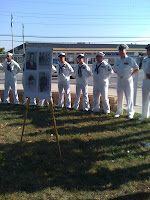 When Elayne Lewis talks about her father, the pride comes out of every pore. Lewis, who is the head of residental aid at HVAF of Indiana, Inc., says Lieutenant Junior Grade Graham Edward Martin, a veteran of the U.S. Navy, was a man who championed fairness for people from all walks of life.

“He was a very modest person and never wanted attention for himself, but my father always fought for justice for all people,” Lewis says.

Graham Martin was one of 13 African-American enlisted men who became the first African-American commissioned and warranted officers in the U.S. Navy. The group was known as “The Golden Thirteen.”

A ceremony Wednesday, August 17, 2011, confirmed Martin’s place in history. Family, friends and dignitaries attended a dedication ceremony to rename the Fall Creek and 16th Street Park in Indianapolis, IN, in Graham Martin’s honor. The dedication was a part of events connected to 2011 Navy Week celebrations in Indianapolis.

You can learn about how parks and recreation officials chose to name the Graham Martin park in honor of The Golden Thirteen member in a story by Indianapolis Fox News affiliate WXIN-TV Fox 59.

“My father was very proud to represent Indianapolis in his military and civilian life, and I am so happy that the city has chosen to proudly recognize him as one of its own,” Lewis says.

Martin attended Crispus Attucks High School in Indianapolis, and in 1941 he graduated from Indiana University, where he played college football. He enlisted in the Navy in 1942 at a time in military history when African-Americans were segregated from the rest of the Navy community. He was married to his high school sweetheart, Alma Patterson, for 57 years, and now his memory will live forever through the park named in his honor.