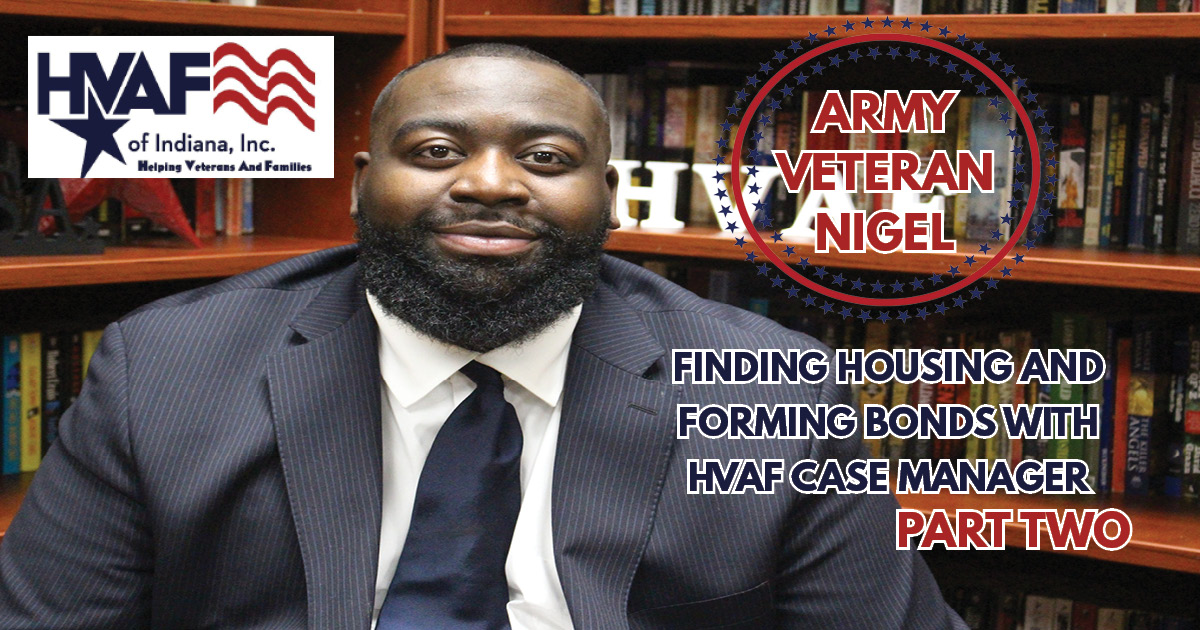 Last week, we introduced you to Army Veteran Nigel. We shared how HVAF’s Employment Team helped Nigel start a new career at Indianapolis Urban League. You can view Part One of his story here.

“He helped me with that by giving me numbers and telling me where he would like to live,” Bobby said. “I would reach out to these apartment complexes and talk with them and explain to them what HVAF does and what the Transition in Place program here does.”

With HVAF’s Transition in Place (TIP) program, veterans move into their own apartment and HVAF holds the lease. The veteran assumes the lease after HVAF’s case managers help them reach self-sufficiency.

“It was kind of crazy. We went to all different sides of town. It took two months to make it happen,” Nigel said. “It was a great process, he always told me we’ll figure it out if this one doesn’t work we’ll find another one. And he always kept me grounded and told me to stay patient and everything was going to work out.”

Nigel has now lived in his own apartment for about six months. He plans on renewing his lease and save up his money so he can move into a bigger apartment or buy a home later on.

Not only is Nigel happy to have a roof over his head, but he is glad to have someone like Bobby in his life. As a fellow Army veteran, Bobby and Nigel could connect on a deeper level.

“All of the great wisdom and advice that he’s shared with me and teaching me certain things that school and the service can’t teach you. It’s been a blessing – he’s a blessing to everyone,” Nigel said. “Every day that he’s not serving his country – he’s still serving his country because he’s still giving back. To me, that’s something I cherish and appreciate from Bobby.”

Unfortunately, Nigel said he experienced discrimination in the military. Because of this he felt hesitant to reach out to a veteran’s organization for help. Thankfully, Bobby redeemed this experience for him.

“Talking to Bobby, he made me realize that regardless of your skin tone, there are people out there that really do care and want the best for you and they understand that people do get discriminated against and do go through different things while serving,” Nigel said. “He really made me realize that he really did care and he really wanted to give back.”

Nigel also wants other veterans who went through similar negative experiences in the military to be encouraged after hearing his story.

“Any veteran that sees this: don’t let what you went through in the military dictate what goes on now,” Nigel said. “Unfortunately bad things happen to certain people in the military, but that’s not the end.”

Your support means veterans like Nigel can receive the housing and employment help they deserve! Make a donation to HVAF today: