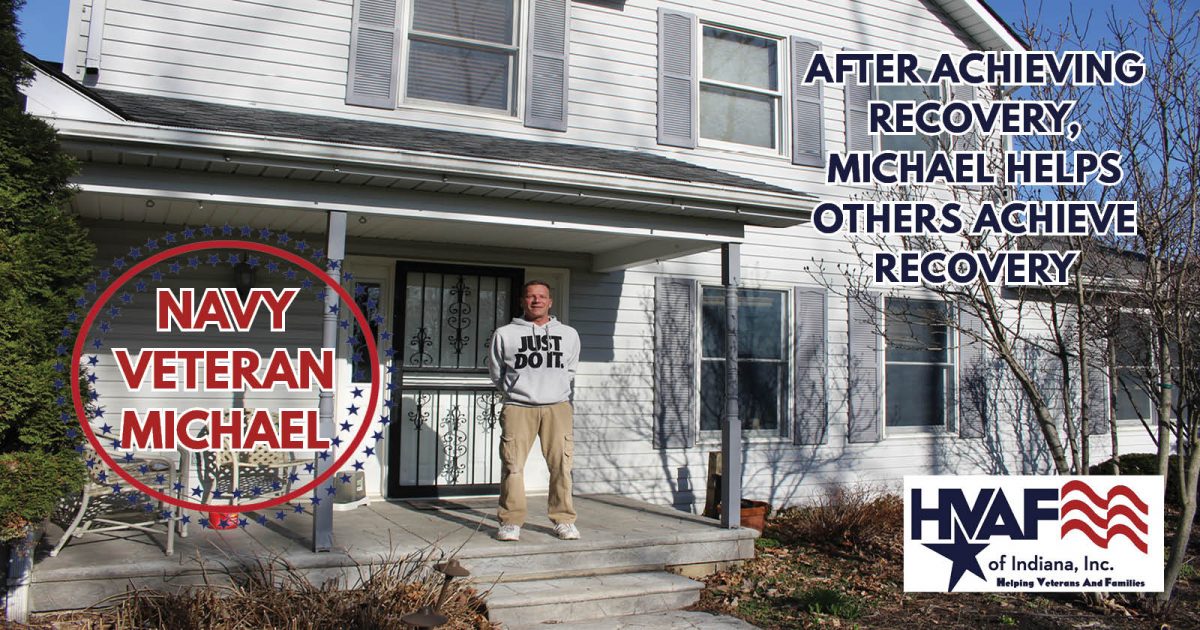 “Back in the military, my alcoholism was really just starting. I actually enjoyed the military and it was a good time for me,” Michael said. “It was my beginning of my alcoholism. It had nothing to do with the military necessarily or my serving, it was just who I was.”

After the military, Michael went to college for a few years. But due to his alcoholism, he ended up dropping out. Since then, he has worked in landscaping. He found lots of success in landscaping – as he even owned his own business. While he had some very productive times, his alcoholism always caught up with him, leading him to go from job to job every three months.

In 2011, Michael came to HVAF to participate in the organization’s former recovery program: REST. At that time, that was his longest period of sobriety. He remembers HVAF’s Peer Mentor, Elayne, who served as the program’s cook at the time. During that time in his life, he said she was the only person who truly treated him like a human being.

“I learned a lot about myself at HVAF,” Michael said. “HVAF was awesome.”

Since December 2019, Michael has been 100% sober. And he has now been able to give back to others struggling with recovery. A few years ago, he lived in a house with other men and noticed they couldn’t find work because of their prior record. He had started a small landscape company and hired on some of those guys so they could have a job.

Through mutual friends, he met Kevin – who had a vision to have a house for men working on recovery as well as a landscape business that employed the men.

“He wanted it to be holistic to where the guys can not only get sober in a safe environment but also deal with what’s going on in life, with being able to leave and work,” Michael said. “His vision and what I was trying to do were very parallel and so we met and it was a good fit.”

Michael began working for Rapha Road in 2021 as the designer for the landscape business (Hope Grows) and as well as the house manager for the men living there. After about six months, he learned he didn’t have time to do both, so now he is the full-time manager.

Every morning, Michael wakes up with the men and they have breakfast before heading to work. During the day, Michael spends time doing any chores around the house, works on business plans with Kevin, and has worked on getting certifications. He now has two peer recovery coach certifications – which has lead him to having a second job at Community Hospital in the emergency room. After people detox, he will talk to them about how to make plans for recovery.

Michael enjoys helping the men with anything they need so they can find recovery just like he did.

“Our goal is whenever they leave here, they’re set for life.”