A police escorted group of 40 motorcyclists took a scenic route through the northwest side of Indianapolis on September 28.
HVAF thanks the following sponsors for the 5th Annual Freedom Ride: Rolling Thunder, Comm Data, Riders Insurance, Fishers Post 470, Vigilantes, Studio 77, GTECH Indiana, VFW Post 1120, American Legion Post 64, ALR 276, ALR 145, and Pat’s Tavern.
The ride was led by HVAF volunteer Heather Meiser with the assistance of 6 committee members.
“We’re here to serve our veterans…whether it’s getting medical for the wounded or finding homes for the homeless, our support does not end after a veteran serves,” says Heather.
Heather extends thanks to the entire committee including Tina and Bobby Mullins, Tom Kruse and Randen Miller.

Food was provided by Barto’s Catering & Concessions. More than $1,650 was raised.

Among the attendees was Jordan Whitledge from Senator Joe Donnelly’s Office who is photographed in the middle. 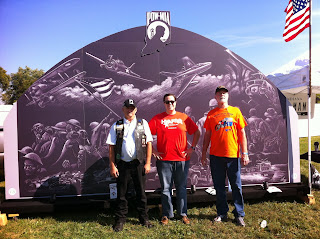