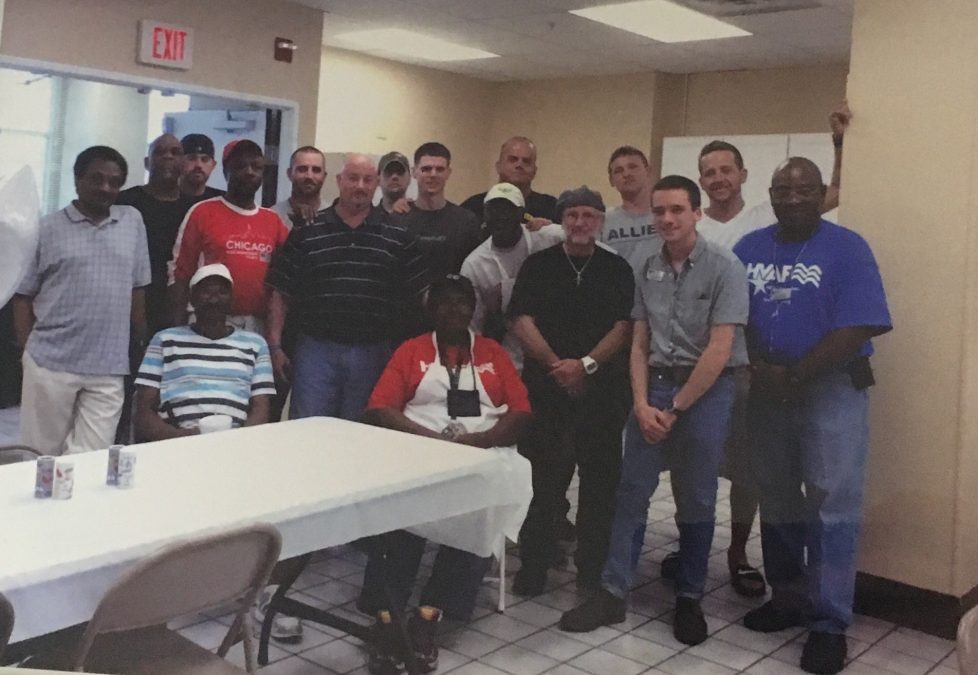 Jon Hall (back right, in white shirt) participated in the REST program for several months. He said HVAF led him to full recovery.

In 2014, life wasn’t so great for Army veteran Jon Hall. After a few years out of the National Guard, he found himself back into his old habits before he served. He was involved in drugs and getting in trouble with the law.

That same year, while at a rehab facility, he met James Miller. As one of the peer mentors for HVAF, James was telling Jon about all of the services the organization provides for veterans.

For a few months, Jon spent time in one of our transitional houses, making improvements to his life while seeking our services. In 2015, Jon decided to come back to HVAF to participate in REST, a former HVAF program that helps drug users follow the road to recovery.*

Jon said he made lasting relationships at HVAF, as he spent lots of time with HVAF employees— including, James, peer mentor Fred Young and Elayne Lewis.

The relationship manager now, Elayne was the cook for the REST program. Jon said she even arranged for him to be baptized at her church.

“Everybody there was just helpful and kind and caring. They truly cared about what they were doing and the people there,” Jon said. “I had never experienced that and hadn’t been in a place like that before.”

Fast forward two and a half years later, Jon has regained custody of his 10-year-old son and is reunited with his children who were estranged from him before.

Now living in Lafayette, Jon works at Subaru. He said they were open to accepting his past and hiring him into a full-time position.

“My life is awesome, it really is. I feel like I’m truly blessed,” Jon said. “I’m actually responsible and productive, probably for the first time in my life.”

Although he relapsed a few more times after the REST program, Jon said HVAF helped him to learn recovery is possible.

“I think ultimately it’s something you have to figure out on your own and you have to be ready but you have to want to be ready, too,” Jon said. “And the information, the seeds that were planted there in my life, were eventually what led me to being able to turn my life around.”