Message from the CEO: HVAF is proud to partner with the Indianapolis Colts & Bob Woodruff Foundation 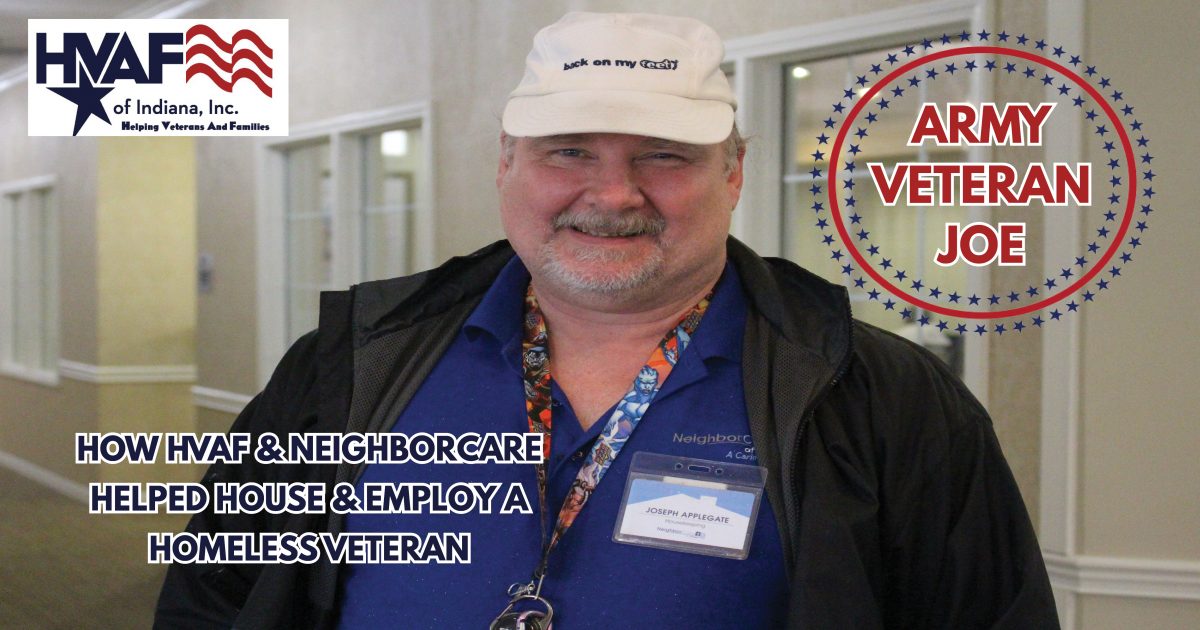 A few years ago, Army veteran Joe moved from southern Indiana to Indianapolis so he could live closer to the VA Hospital. Unfortunately, due to COVID-19, Joe got laid off. He found another job but faced an additional hurdle when getting a hernia. His health issues led to Joe losing his job AND home – with nowhere to live.

After going to Wheeler Mission for help, they pointed him to HVAF for further assistance.

“HVAF gives you a chance to stand up on your own two feet again,” Joe said. “You couldn’t ask for a better place.”

Not even a few weeks later, his case manager, Bobby, called him and said he found Joe a home! Since May 2021, Joe has lived at NeighborCare of Chapel Hill, a senior living community in Indianapolis.

“I love it,” Joe said. “There are a lot of fun things to do and a lot of great people.”

Bobby said he enjoyed working with him, as Joe made it super easy for him to help. As a fellow Army veteran, Bobby and Joe got along great!

“I tend to build relationships with the veterans because I’m a veteran myself,” Bobby said. “I have the ideology in my mind that I owe them because they paved the way for my career in the military to go the way it had. Anything I can do for those that served before me is my privilege.”

NeighborCare has housed HVAF’s senior veterans for many years now. The partnership has led to them becoming a monetary supporter, including being a sponsor for HVAF’s annual fundraiser – Operation Alpha.

“I think this is a great partnership with NeighborCare,” Bobby said. “They’re big supporters of us and do anything they can to help us house veterans.”

Joe not only lives at NeighborCare, but he also now works there. First hired on as a painter, he said he does a little bit of everything for the housekeeping team.

“We have a lot of people here who are elderly and some of them need help,” Joe said. “It don’t bother me, I love to help people. And if I can put a smile on someone’s face, it just makes my day.”

His supervisor, Director of Maintenance Jeremy Spence, said he is thankful to have Joe on his team.

“There’s not a lot I have to ask of him,” Jeremy said. “You couldn’t ask for a better person.”

When you come to NeighborCare, you will see Joe walking around and saying hello to all of the residents and staff members – being on a first name basis with everyone. He hasn’t had family since 2008, but now says he finally has a family again.

“This is the perfect place for me.”

Joe is one of many homeless veterans in Indiana. In fact, 1 in 10 homeless Hoosiers are veterans! Help us end veteran homelessness today: