“Without HVAF, I wouldn’t be where I’m at now.” 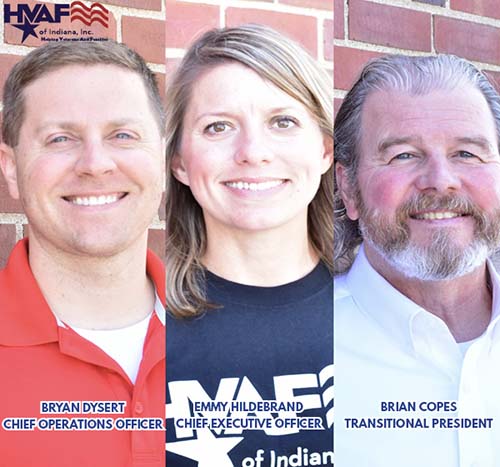 The Board of Directors voted to promote Hildebrand as the organization’s newest CEO. Brian Copes has decided to retire to spend more time with his wife and family. He will remain on as Transitional President to provide support and stability over the next several months. Former Vice President for Operations Bryan Dysert has been promoted to the role of Chief Operations Officer with additional leadership and oversight throughout the agency.

“The Board of Directors is grateful to Brian for his leadership over the last 5 years,” Board Chairman Tony Vespa said. “The agency has grown significantly under his direction, serving more veterans with additional programs and services.”

Hildebrand brings over 20 years of experience serving veterans, including nearly 10 years at HVAF. While a senior at DePauw University, Hildebrand had the privilege to join the staff of United States Senator Richard G. Lugar. She went on to work for the statesman after graduation for 10 years as his Military and Veterans Affairs Coordinator.

Upon Senator Lugar’s retirement in 2012, HVAF hired Hildebrand as the organization’s first Public Policy Coordinator. In addition to public policy, her role has expanded and evolved over the last nine years to include developing major funding proposals that help expand services offered to veterans, transforming and managing the Veterans Community Center, creating key relationships with community partners and government agencies, working on special projects including adding permanent supportive housing to HVAF’s housing portfolio, and a variety of other responsibilities. Hildebrand also recently earned her Master of Business Administration (MBA) through University of Southern Indiana.

“I am excited and humbled to be the next CEO of HVAF of Indiana with the opportunity to lead such an extraordinary team,” Hildebrand said. “I look forward to continuing the good work this agency is known for.”

“Our mission to serve veterans will continue uninterrupted with Emmy and Bryan leading the team and guiding this agency,” Copes said. “It has been my great privilege and distinct honor to serve as a member of Team HVAF in the autumn of my professional career.”

About HVAF: Helping Veterans And Families (HVAF) helps homeless veterans return to self-sufficiency and engages at-risk veterans and their families to prevent them from becoming homeless by providing supportive housing, case management, food, hygiene and clothing, as well as other essential services.