Once homeless, veteran now serves others 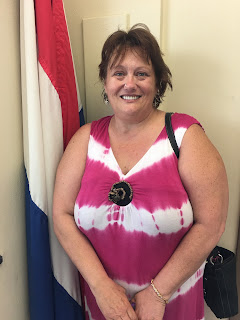 In 2014, Terri, 56, walked into HVAF in need of housing. She carried very little; only her DD214 card proving she was a veteran of the U.S. Air Force. The card is all she needed. HVAF provided her with a furnished apartment, food, hygiene items and clothing. It was an adjustment, but so was homelessness. Terri was finally getting the help she needed.
Once housed at HVAF, Terri no longer needed to find shelter. She began attending group meetings on a range of mental health issues, including depression, bipolar disorder and PTSD. She attended meetings at the VA.  Because of her mental health issues she says it has been difficult to hold down a job.
At HVAF, Terri was referred to HUD VASH and she soon started receiving disability payments and permanent supportive housing. She also qualified for a federally funded program which allowed her to receive a new bed, bedding and assistance with her car repairs. Thanks to the Supportive Services for Veteran Families program Terri received her first new bed.

“They set me up with a bed and at 56 it is the first new bed I’ve ever owned,” expressed Terri as she knelt down and cried “I really appreciate it.”
All of these resources were offered to her because she came to HVAF.
Today, Terri is living in her own apartment and receives ongoing mental health treatment at the VA. She also has reunited with her 18-year old cat, Isabella.
Share