A thank-you message on Veterans Day 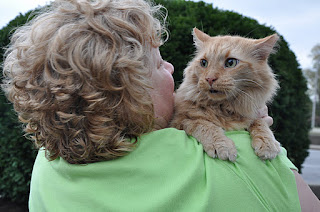 “He has changed my life,” Gloria says of her 2-year-old rescue cat named Ginger.

Two tours as a Naval aviator left Gloria in a state of anxiety, and war has made her wary of crowds – and even of individuals who got a little too close.

“I tense up and get really uneasy,” says Gloria, who struggles with Post-Traumatic Stress Disorder (PTSD).

Gloria represents a growing trend among veterans. Across the country, women now make up between three to six percent of the homeless veteran population, according to National Coalition for Homeless Veterans. While their numbers may still be small compared to their male counterparts, women veterans face the same problems.

“People think we’re strong coming out of the military and should have our stuff together,” says Gloria. “It gets really hard. Some people don’t know where to go, what to do, especially when you have PTSD.”

Gloria once held a high-level government job in law enforcement, but at 45-years-old, found that she was going through unexplained upheaval and irritability.

“I thought it was menopause, but I was having a mental breakdown,” says Gloria.

Brenda Finnell, an HVAF case manager who works with Gloria, says a significant challenge for female veterans include lack of available housing for themselves and their children.

“I think once we reach them we can do a really thorough job of providing assistance and resources,” says Brenda.

Gloria, who was homeless for four years, now lives in HVAF’s Moreau House, and spends her days gardening, rescuing cats and meeting daily with case managers.

“We are seeing more women who need help with housing,” says Kalisha Hayes, HVAF housing specialist. “Those who have served this nation shouldn’t find themselves on the streets.”

VA Secretary Eric Shinseki tells HVAF that women are a priority in the larger fight on veteran homelessness. A total of $10.3 million in grants presented this year will be shared with organizations, including HVAF, in eleven states to benefit homeless women veterans, including women with children, elderly women, or those who may be terminally ill.

HVAF is helping Shinseki and the VA meet this goal by opening another property that serves female veterans.

Jane, an Army veteran, is one of the first of the veterans to move in last month to Manchester Apartments, HVAF’s newest property. Manchester is the second HVAF co-ed housing location along with Moreau House.

“It’s tough out there for women veterans so I am thankful for this new chapter in my life,” says Jane.

Jane is working and plans to return to school to finish her degree in social work.

“I feel safe in this place. I am in control of my life,” says Jane. “I am no longer in an abusive situation.”