After sleeping in a rooming house, homeless veteran finds housing

From day shelter to stable housing 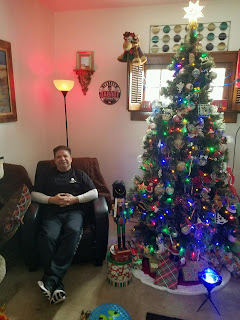 Gregory DeBorde sits unblinkingly, perched on his favorite black recliner chair in his two-bedroom home. It is a home that he now shares with his wife and son, Lucas, and it is lit by the warm orange glow of a single floor lamp. A Christmas tree illuminates the room. DeBorde, a Navy veteran, was once near homeless and worried about how he was going to provide Christmas for his family. In August 2014, he called HVAF and qualified for HVAF’s Supportive Services for Veteran Families (SSVF) program which helps veterans and their families avoid becoming chronically homeless by providing them rental assistance, utility payments, and furniture purchases. He was also provided Christmas from a generous HVAF donor that year.

HVAF Case Manager Kayla Jackson helped him move into a rental apartment in Indianapolis after previously renting in Avon which allowed him to gain stability with housing and focus on other needs. All of this in combination with his own self-determination eventually led him to be able to purchase his own home.

Also, Gregory skillfully went through the process of re-applying for disability benefits and to his success began receiving them. In March 2016, he moved into a home in Indianapolis’ Irvington neighborhood. He never imagined himself near-homeless, but is thankful for the hand-up and services received from HVAF.