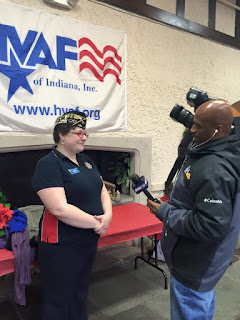 Iraq war veteran Chistylee Vickers followed in both parents’ footsteps to serve in the Army but noticed the growing struggles female veterans faced once at home. Chistylee, Commander of the Indianapolis American Legion Women’s Post 438, organized a “Grab & Go” event at HVAF on December 23 where more than 60 veterans were provided water, food, essential hygiene items and clothing.

“I use everything that happened when I was in the Army. And every bad day I channel that into making a difference,” Vickers said. “I advocate for veterans’ issues.”

According to the National Coalition for Homeless Veterans (NCHV) women currently make up 8% of the total veteran population and 14.6% of the active duty military, increasing to an estimated 16% by 2035.

Vickers, who enlisted in the Army in 2002, served in Iraq as a light-wheel vehicle mechanic. It was the hardest thing she’s ever done, she says. She describes her time with her unit at Fort Campbell, Kentucky as a “battle” and her command “toxic.” She completed her service in 2007 and eventually moved back to her hometown of Shirley with her husband and two children.

Chistylee is one of more than 35,000 women veterans living in Indiana, and women make up the fastest growing segment of the veteran population. 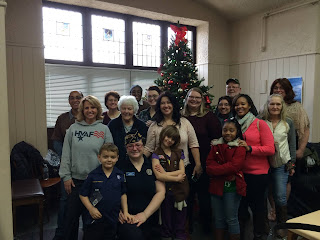 “The experience that I wanted to recreate with the “Grab & Go” event was to provide for the veterans of HVAF through care packages,” says Christylee. “When I was deployed it was the mail and the care packages that kept my moral up the most. Knowing that someone cared and understood how small comforts can raise your mood and self-esteem. The small things that I couldn’t get, became some of the first things I missed and cherished when I received them.”

She is playing a part in ending homelessness.

“Knowing that you’re not forgotten, and there are those who are still grateful for the oath they made years before makes a big difference,” adds Christylee. “Small things that can make a big difference.”