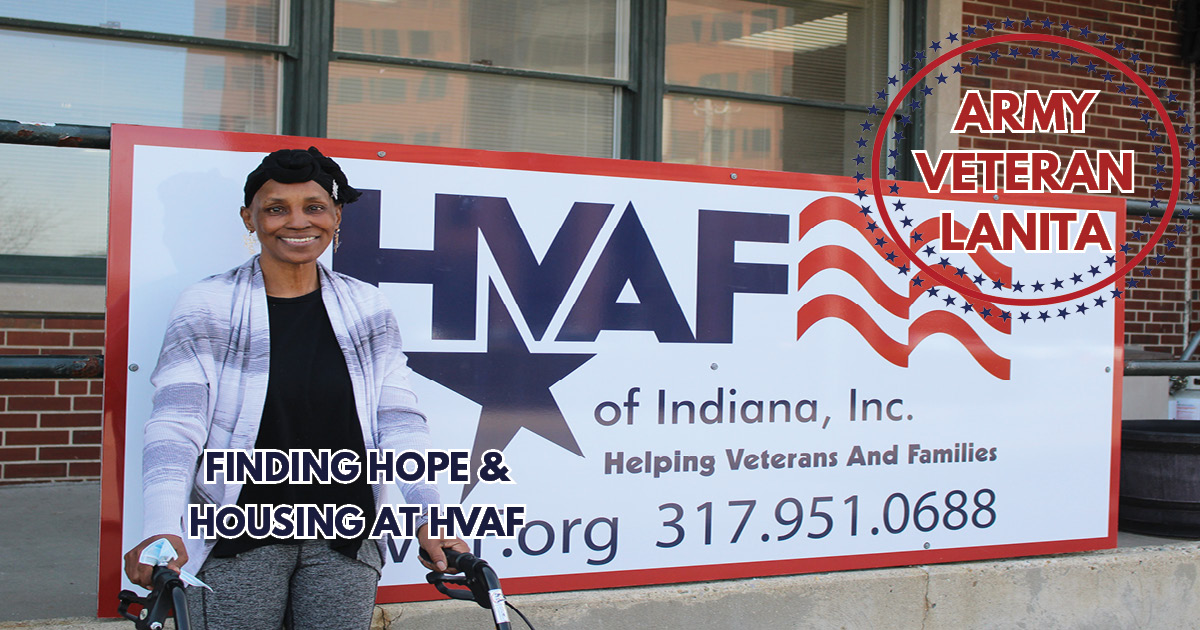 HVAF’s mission is to provide, hope, housing, and self-sufficiency for all veterans. And that is exactly what Army veteran Lanita is experiencing living at one of HVAF’s temporary housing units.

Serving in the Army

In the 1980’s, you could find Lanita working as a dental hygienist. One year, as she watched the Super Bowl, she kept seeing an advertisement about joining the Army. Because of that ad, she felt led to join and serve her country.

“The Army taught me I could go through anything and make it,” Lanita said. “No matter what it is.”

Fast forward to fall 2021, Lanita lived in Muncie but needed to move. She couldn’t live safely in her home anymore, with the walls fallen out, black mold, and lots of other issues.

“When the health department came, they coded the whole place,” Lanita said.” They told me I was really lucky to be alive.”

With three weeks to move, Lanita felt stressed. She quickly moved her things to live with her daughter in Carmel, but wanted her own place as she got back on her feet. One day, HVAF called to let her know they had an apartment available for her.

For the last several months, Lanita has lived at HVAF’s Manchester Apartments.

“I love my apartment. And I love my bathroom,” Lanita said. “I had a gift from my secret sister at church. She knows I love Paris. And so, she had bought me a whole Parisian theme for my bathroom. The curtains have the Eiffel tower – and the toilet and the rugs all have Paris on it.”

A few months ago, she tested positive for COVID-19 but felt thankful HVAF’s case managers were there to take care of her. She is also thankful for the food pantry.

“All of the volunteers and the staff here at HVAF – I have not seen one bad person,” Lanita said. “They have all been very helpful.”

Your support means HVAF can support veterans just like Lanita! Make a donation to HVAF today: