A homeless veteran turns her life around with help from HVAF 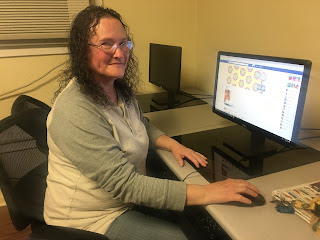 A Case Manager at HVAF helped connect an Army veteran with the resources she needed after being unemployed for eight months.
Anita M. joined the Army when she turned 21 for free room and board and a chance to travel. Two and a half years later she was pregnant. Then, as a result of unemployment, she became homeless.
Anita completed basic training in Leonard Wood, Missouri, then traveled to Denver, Colorado with her fiancé. The couple later had three children. Anita says she suffered from physical and emotional abuse in the relationship, but stayed because of the children.
Her hardships continued after the Army.
She couldn’t support herself. She ended up on the streets, becoming a statistic as a homeless veteran.
“As a result of the abuse, I suffered from depression and anxiety,” says Anita.
She moved to Puerto Rico in 1982 after she got out of the Army.
“It was a hard life and I was living on $200 each month while supporting three kids. At one apartment she had no water, heat, or electricity.
In 1987, she filed for divorce and moved back to home to Indianapolis.
Anita quickly found happiness serving others through her work as a Certified Nursing Assistant (CNA). In 2015 she lost her job. At this time, she knew where to turn for help after learning about the organization from a friend.
She learned about a job fair through an employment specialist at HVAF. Now, after eight years of unemployment, Anita accepted a job as a CNA in October. She says it offers better benefits.
“I am in a better place and I am thankful to have a roof over my head,” adds Anita.

But thanks to HVAF, an organization that provides transitional housing, programs, services and basic needs for veterans, social worker Alison Hughes was able to help Anita put her life back together.
Share