A meal makes a difference

Reggie O., 57, entered the Marines with a passion for cooking and a long resume working at restaurants. When he finished his military service in 1975, Reggie came home, married in Nashville, Tennessee, had one child, bought a house and, and as he says, started to live happily ever after. 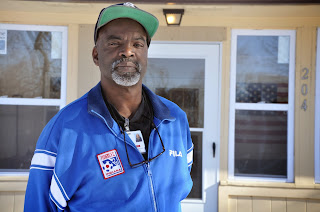 But after divorce, his battle to keep work in the construction industry lasted for two decades. Eventually, Reggie became homeless and joined the ranks of thousands of homeless veterans around the country. With no money coming in, Reggie didn’t know where his next meal would come from.
He came to HVAF in 2012 where he joined other veterans in transition.
“We all have so much in common and so much fellowship just having served,” he said. “Now I’m turning around and serving other veterans by serving them meals at Warman Apartments where I live. It’s an awfully good feeling.”

Although homelessness is a concern for the general population, veterans face unique struggles, says Charles Haenlein, a Vietnam veteran and President & CEO of HVAF.

“These men and women went away to combat and came home a different person,” says Haenlein. “It’s a hard process for a lot of people.”

“The stigma of homelessness can also create a cycle that is difficult to break,” says Abby. “There are a lot of intelligent, well-mannered people that have just become displaced. Most anyone could be one paycheck away from being homeless.”

Nearly a year after becoming homeless, Reggie says he’s ready to start a new life with a positive attitude and hopes to spend more time in the kitchen dishing up warm meals. He recently landed a job at IU Hospital working as a Cook.

“I love preparing and serving warm meals because it puts a smile on people’s faces,” says Reggie. “I’m getting a second chance to do a lot. If nothing else, the struggles of homelessness strengthened me.”

Reggie also participates in Back on My Feet, an HVAF partner and national running program that promotes self-sufficiency through running.