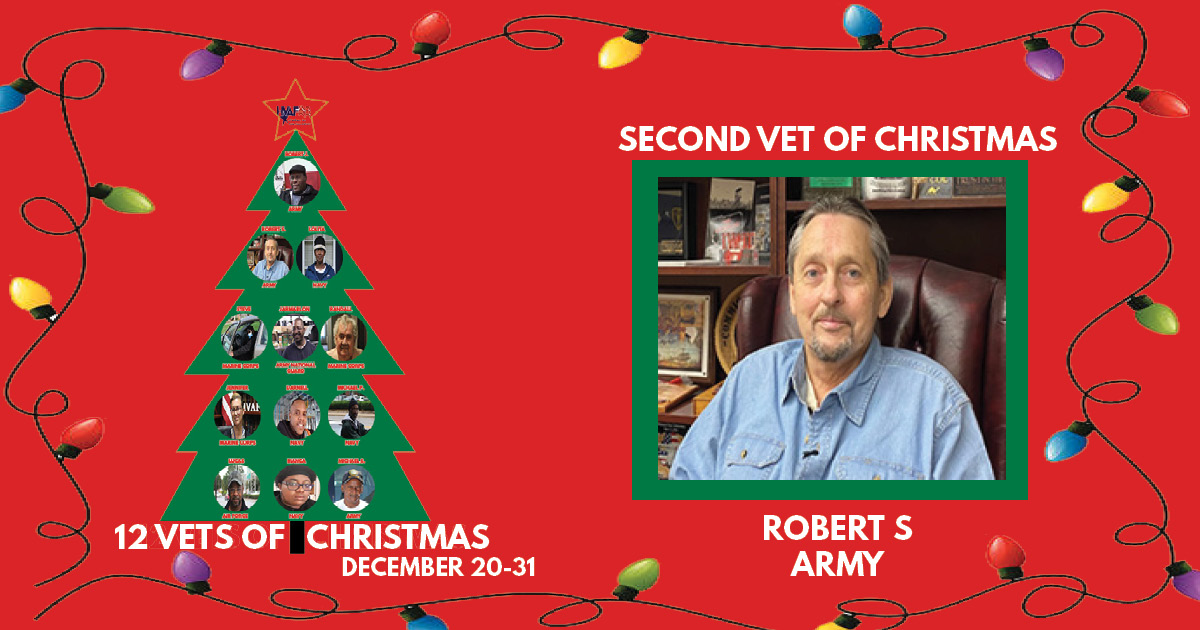 This story is part of HVAF’s annual tradition: 12 Vets of Christmas, where each day we are featuring a veteran whose life has been positively changed because of the essential services and programs HVAF provided in 2021.

Army veteran Robert came to HVAF because he needed to find a place that helped find employment for veterans. But he didn’t only need a job – he needed clothes, food, and a home. After getting out of jail a few days prior, he only had the clothes on his back.

“When I got out, I had no family support,” Robert said.

He had already heard about HVAF and how the organization works for provide food, clothing, housing, and employment for veterans. After finding a temporary place to stay at Wheeler Mission, Robert came to HVAF for help.

HVAF helped him get every single thing he needed, starting off with food and clothing. While living at Wheeler Mission, he continued coming to HVAF to receive housing and employment assistance.

Within a few weeks, Employment Specialist Roxane Piepenbrok helped him get hired at Downtown Indy, Inc.

“Things just kept working out for him,” Roxane said, as he moved into an apartment, saved up money to buy his own car, and furthered his career.

“It kept on going from there…”

About a month after coming to HVAF, Transition In Place (TIP) Coordinator Danny Park secured an apartment for him. HVAF helped Robert furnish the place, and even paid for his rent until he became more stable.

As a recovering addict himself, Robert wanted to help other veterans who are currently overcoming addiction. Roxane first pointed him towards Horizon House’s Recovery Cafe so he could receive support. After spending time there once a week, he realized he wanted to work there.

Thanks to the Bob Woodruff Grant given to the Employment Team, HVAF could pay for Robert to receive training so he could become a recovery specialist.

“Roxane was behind me 100 percent. She kept putting opportunities out there, and whatever she suggested I did,” Robert said. “And everything just kept working out.”

Today, Robert serves as a Certified Recovery Specialist at the Recovery Cafe in Indianapolis. And on Tuesdays, he joins HVAF’s Rodney Jackson in going out to the homeless camps and serving the veterans living there. He is so thankful to have found a place that provides food, clothing, housing, and employment for veterans.

“This is probably the best life I’ve had ever since I got out of the Army,” Robert said. “Everybody at HVAF has always helped me, and has always welcomed me and just being here encourages me to keep on moving ahead.”

Roxane is so proud of Robet’s hard work, and knows he is going to continue to grow from here.

HVAF helps with employment for veterans

Despite all of COVID-19’s challenges, HVAF’s Employment Team hasn’t slowed down.

“We didn’t stop, we didn’t slow down,” Employment Coordinator Kiara Walker said. “We were still able to get people placed, and get people employed and give them the assistance that they need.”

As Employment Coordinator, Kiara is in charge of the team’s five case workers. They help any veteran who walks through HVAF’s doors. Each case worker helps the veterans with interview prep, resume help, and job application assistance.

“Anything related to employment we are going to help them with it,” Kiara said. “And we are very individualized with those we are working with.”

YOUR continued support ensures that other veterans like Robert receive the life-changing help they need. Will you make a tax-deductible donation today to support those veterans?